“The intent of the Water Petal is to realign how people use water and to redefine ‘waste’ in the built environment so that water is respected as a precious resource.” International Living Future Institute

The Water Petal has only one imperative, Net Positive Water, which requires one hundred percent of occupant water to come from captured precipitation or closed loop water systems. Water used on site for drinking or irrigation must also be treated on site, without the use of chemicals if allowed by the regulatory authority. This helps ensure that certified projects are able to operate sustainably within the water balance of a given place and climate.

For a Living Building in Atlanta, Georgia, an integrated approach is needed for onsite capture of the variable amount of available water and to optimize it for the building’s needs.

The Kendeda Building relies upon rainwater, greywater, and stormwater systems to achieve the Net Positive Water requirement. Collectively, these systems supply all the potable water demands for the building while recycling waste water and stormwater to recharge the surrounding aquifer. The Kendeda Building has the first rainwater to potable (i.e. drinkable) water approved system in Georgia for a non-single family residence. This system is permitted as a Public Water Supply System through Georgia’s Environmental Protection Division (EPD).

Rainwater is harvested from the 913 panel photovoltaic (PV) array, roof deck, and green roof to supply all potable water demands for the building. After the water is collected, it is filtered and routed to the 50,000 gallon cistern in the building’s basement for holding. The cistern system treats approximately 41 percent of the annual rooftop runoff collected; the remaining 59 percent of the annual rooftop runoff is released from the cistern and directed to onsite stormwater systems.

EPD granted The Kendeda Building a rainwater-to-drinking water permit during its 12-month Living Building Challenge performance period. This permit validates that the building’s water system produces safe drinking water with continuous chlorination disinfection. We are working with EPD to determine how this first-of-its-kind, public non-transient non-community water system in Georgia can meet the ongoing testing requirements of US EPA National Primary and Secondary Drinking Water Regulations and Georgia Rules for Safe Drinking Water (e.g., the parameters, number of samples, sampling locations, and frequency of sampling). Once the logistics of ongoing testing are in place and with EPD’s approval, Georgia Tech will activate the rainwater-to-drinking water system pursuant to the permit issued in 2020.

At that point, as water is needed, it will be pumped from the cistern to a filtering tank and disinfected with UV* lighting to potable standards, then piped throughout the building for potable water needs. Potable water uses in the building include sinks, water fountains, showers, and the minimal amount needed for the composting toilets.

* Ultraviolet disinfection (UV) is allowed by the Living Building Challenge. It should be noted, however, that UV disinfection lamps typically contain mercury, an item that requires the use of an “Exception” to comply with the Materials Red List.

Greywater (or water that does not contain organic matter) is collected from shower drains, sink drains, and water fountains and directed to a primary tank for infiltration on site. This recycled water is pumped to a constructed wetlands at the south end of the site, gravity fed to other filtration and disinfection tanks, and ultimately allowed to infiltrate back into the soil via leach fields at the north end of the site to recharge the surrounding groundwater.

Constructed wetlands are treatment systems that use natural processes involving wetland vegetation, soils, and their associated microbial assemblages to improve water quality. In addition, condensate collected from HVAC system is used for irrigation.

A blackwater (water with organic matter) system is not present on the project. Rather a total of 12 composting toilets and four urinals throughout the building separate liquids and convert solids into a fertilizing soil which can be used for uptake by plants.

Living Buildings are only allowed to have minimal stormwater runoff. For The Kendeda Building, this is water from rainstorms not captured for potable water needs. All stormwater is captured on site and infiltrated back into the soil though controlled design measures that leverage the site’s hydrology – namely seepage areas, rain gardens, and permeable pavers.

Kendeda Building is located on a previously developed site (formerly a parking lot). The overall design intent is to restore the site as it existed prior to pre-human development by mimicking the hydrological flow of the area and re-introducing vegetation and biology native to the region, referencing the Piedmont Forest ecosystem.

In addition to providing access to the Eco-Commons, the cascading porch areas support substantial volume storage of stormwater underneath permeable pavers. The method used for The Kendeda Building manages rainwater in dispersed locations along a sloped site. This requires careful use of gravity as a tool for equalizing a dynamic system.

To obtain a potable water permit, The Kendeda Building must demonstrate that the treatment system meets the Georgia Rules for Safe Drinking Water stated under the Georgia Safe Drinking Water Act. This requires a minimum of 30 days of sampling the water throughout the building for a wide range of parameters such as bacteria, viruses, and heavy metals.

During this period, which begins in fall 2019, water from the in-house treatment system will flow through the building’s potable fixtures (sinks, water fountains, and showers) for testing purposes only. Occupants and visitors will have access to temporary, potable water solutions (e.g., water coolers and portable, stand-alone sinks).

The building will operate utilizing City of Atlanta water until test results have been reviewed by the EPD and a Public Water Supply System Permit is issued. After the permit is issued (timeline unknown), the building can begin operating its in-house rainwater-to-potable treatment system in accordance with the EPD permit. For safety reasons, the building’s fire suppression system is connected to the City of Atlanta water system at all times.

This is a new Imperative that requires projects to meet a variety of best practices. For example, projects can not use potable water for irrigation. Moreover, they must reduce water use for other needs than a baseline regional building of the same type at the following reduction rates:

All projects must treat all stormwater on site, through natural or mechanical means and without chemicals, and manage all stormwater based on both pre-development hydrology and current ecological conditions, as determined by a qualified professional.

All projects on a Combined Sewer Overflow system, or in a floodplain (based on an Exception), must
incorporate stormwater detention and avoid sheet flow off the site. 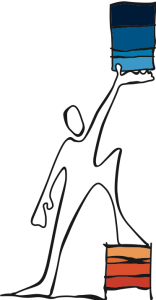 Handprinting is a compliance pathway that accounts for a project's net positive impacts that are beyond its site boundaries. Unlike footprints, which represent negative impacts, handprints are beneficial environmental and social impacts. They are therefore reported in positive numbers to represent these positive impacts. The reference point for the positive contribution is Business As Usual, i.e., the typical way of doing something.

Additional information on handprinting can be found in the Living Product Challenge 2.0 Handbook, and for building project teams, also in the Early Project Guidebook.